Shieldbearer offers marriage workshops for all stages of your relationship.

Learn More About our Marriage Workshops 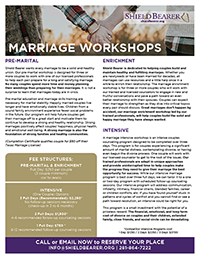 Shield Bearer developed a highly effective Dating Violence Prevention Program in 2007 in response to a request from a local high school to a high number of incidents. Since then, the program has been provided to tens of thousands of adolescents in high schools, juvenile facilities, and houses of worship.

Lindsay Laneigh Ferrill grew up in Katy, TX. As a young girl, she was shy and creative. As a teen, she began to socially come out of her shell, participating in school activities and dating in groups. Linsday always wanted to help everyone around her and had a big heart for others. As an older teen, she seemed to want to stay with guys she dated who had personal struggles to help them.
One of her relationships turned violent. Her boyfriend treated her well initially. Throughout their relationship, he became more and more controlling to the point that Lindsay ended it. He continued to try to win her back with stalking behaviors. With deception, he lured her to a location where he took her life.
Sharin Nightingale, Lindsay's mother, joined Shield Bearer's Dating Violence Prevention Program efforts in 2014, and now her story is a crucial part of the program.

How does it work?

The program facilitators meet with students in all sections of health in a teaching auditorium. The program is the length of a teaching period. The program includes handouts and is interactive, requiring student participation. We typically provide the program every period throughout a school day. Personnel throughout the school need to be made aware of the program and reminded of school policies. There are frequently students who reveal dating violence to a trusted adult throughout the day and the following week.

Invest in Yourself, You are worth it!

Our courses can be accessed through online presentations or workshops delivered in person.

Learn the signs for depression, suicide, addiction, and abuse so prevention or healing can take place.

Know and create a healthy relationship with your children.

Grow closer with your spouse and improve communication and intimacy.

Prepare adolescents as they embark upon adulthood.

Provide adolescents at risk with tools and resources to navigate challenges.

Opportunities abound for all ages & groups to learn, grow, and transform. Shield Bearer wants to be there to help you achieve optimal mental health and wellness as you grow in confidence, character, and connectedness.